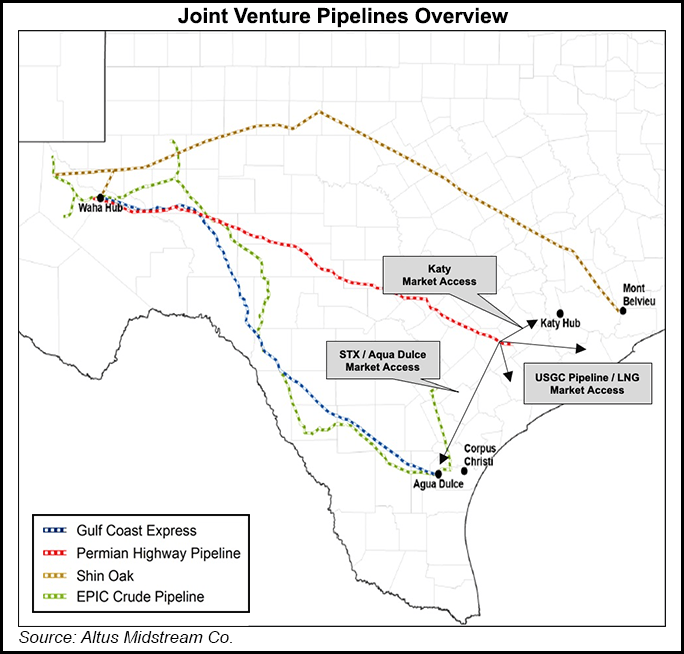 The combination would operate 2 billion cubic feet per day of cryogenic natural gas processing facilities in the Permian Delaware sub-basin in west Texas, with more than 850,000 acres under long-term pay assignments.

The pro forma business would provide intermediary services in waste gas, natural gas liquids (NGLs), crude oil and water. Measured by processing capacity, the combination would become “the largest natural gas transformer in the Delaware Basin and the third largest in the entire Permian Basin.”

Houston-based Altus, 79% owned by Apache Corp., has collection, processing and transmission assets that include the Permian Highway Pipeline (PHP) and Gulf Coast Express (GCX). The APA Corp. also has firm transportation commitments to help underwrite and ensure it can reduce flaring in the Permian.

â€œThis transaction strengthens scale and liquidity, which will be important to Altus’ evolution as a publicly traded entity,â€ said APA CEO John Christmann. â€œWe have great confidence in the new management team and look forward to remaining a key Altus customer for many years to come. “

Once the merger is completed, the company would hold interests in four Permian export pipelines under contract. This would include a controlling 53% stake in PHP, a 16% stake in GCX and a 33% stake in the Shin Oak LGN pipeline. Altus also owns a 15% stake in the Epic Crude Oil pipeline, which connects the supply of the Permian and Eagle Ford shales to Corpus Christi, Texas.

Why did Altus choose EagleClaw?

APA chief financial officer Steve Riney said there had been a “wide range of strategic options” before closing the deal with EagleClaw. â€œThe combination with EagleClaw strikes the right balance between high quality businesses and attractive growth opportunities. “

As part of the transaction, which is expected to be finalized by the end of March, Altus plans to issue 50 million Class C ordinary shares to unitholders of BCP, primarily funds affiliated with Blackstone and I Squared Capital, resulting in combined ownership of 75% of the pro forms a business. The stake of the subsidiary Apache Midstream LLC would be reduced to 20%, and the existing public shareholders of Altus would own 5% of the combined company.

â€œThis transaction is a transformative event for all parties and their respective stakeholders,â€ said EagleClaw CEO Jamie Welch. â€œThe combination creates the largest middleman in one of the world’s most prolific hydrocarbon basins, delivering the scale, operational capabilities and fully integrated service offerings necessary for long-term success. “

When merged, the company would be “well positioned to capitalize on accelerating activity in the Delaware Basin, with expanded processing and transportation capabilities for all three streams, from wellhead to end markets.” , Welch said.

The new management team will be led by Welch. Apache field staff working at Altus should be offered employment with the pro forma company.

[Actionable Insight: Did you know that NGI is one of only two Price Reporting Agencies that include trade data from the Intercontinental Exchange. Find out more.]

The company would retain its headquarters in Midland, Texas, with management of the company in Houston. The company is also considering a name change, which is expected to be finalized before closing.

Apache, which develops the gas assets of Alpine High in West Texas, would continue to be a customer of the combined company. Apache noted that it “assesses the addition of drilling and completion activity in its 2022 capital budget” in light of current gas prices.