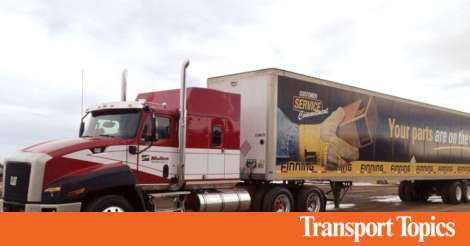 “We had record revenues. We had higher operational profitability. We had a very good quarter. … The acquisitions we made in 2021 provided the growth,” CEO Murray Mullen said on an April 21 conference call with industry analysts and investors.

In total, the acquisitions accounted for C$135 million of Mullen’s revenue growth, the company said.

Soaring fuel prices are the most significant current challenge for the company and the trucking industry, Mullen said.

In parts of Canada, Mullen said the company pays C$10 per gallon for diesel fuel.

If fuel prices remain high, it will increase demand for new equipment because older trucks — those running at around 4 mpg — won’t be able to operate profitably, he said.

While motor carriers impose higher fuel surcharges to recoup the cost, the increases still lag behind prices at the pump. This will balance out in successive quarters and once fuel costs come down.

Inflation will also dampen consumer spending, but one of the benefits is that the slowdown will allow the supply chain to resolve bottlenecks that have plagued the industry for nearly two years, he said. declared.

Across all of the carrier’s business segments, LTL revenue increased 45.5% to C$175.6 million in the first quarter. A combination of revenue from acquisitions, strong consumer spending and an increase of C$8.6 million in fuel surcharges contributed to the increase. The segment’s operating income before amortization, a measure of operating profit, rose 26.2% to C$23.1 million.

Mullen said acquisitions will remain a key source of growth for the company.

“From what I see in this market, acquisitions are the clearest path to growth, especially in a market where full employment is near and new equipment is virtually impossible to obtain,” Mullen said. .

“This strategy is critical to gaining future market share as shippers adapt to structural change in the supply chain. Logistics can no longer be taken for granted. It takes large-scale companies, like Mullen Group, to manage the complexities associated with moving goods,” he said.

Revenue for Mullen’s Specialty and Industrial Services business unit turned positive after falling for several quarters. It increased by 5% to C$83.3 million, thanks to the acquisition of Babine Truck & Equipment Ltd. and higher fuel surcharges. But revenue from the segment’s established business units continued to decline, hurt by a drop in pipeline hauling and stringing services.

The segment primarily depends on the oil and gas industry.

“Evidence is mounting that oil, gas and mining need to reinvest,” Mullen said, which would help the company’s industrial business.

Mullen’s third-party logistics segment in the United States recorded revenue of C$57.3 million. The company did not report revenue for the same quarter a year earlier because it acquired the business in June 2021. It generated C$1.1 million in operating profit for the company.