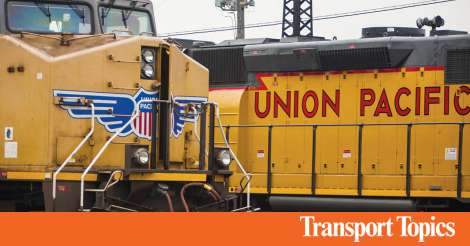 While Union Pacific Corp. released first-quarter financial results that exceeded Wall Street expectations, discussions of service disruptions on its rail network and those of its competitors were at the heart of the concerns of the company’s executives who must soon respond to the Surface Transportation Board of these delays.

“Operationally, we fell short of expectations, which is impacting our customers,” CEO Lance Fritz said on an April 21 conference call to discuss the company’s quarterly results. “We are taking steps to improve resource utilization, increase crews and locomotives where necessary and reduce freight car inventory levels to restore fluidity.”

Union Pacific reports its results for the first quarter of 2022. $UNP https://t.co/VL98vafCkh

The average estimate of analysts polled by Zacks Investment Research was $2.55 per share and revenue of $5.81 billion.

Company officials pointed out that the rail network suffered from severe service issues at the end of 2021 and for much of the quarter.

The Surface Transportation Board, which regulates freight and passenger rail, is scheduled to hold a two-day public hearing in Washington on April 26-27 with railroad leaders on what the STB called “pressing issues in freight rail service”.

The STB ordered officials from BNSF Railway, CSX Transportation, Norfolk Southern and Union Pacific to appear at the hearing.

Many rail customers, particularly in the agricultural sector, have complained that the challenges faced by Class I railroads are impacting their operations, especially when it comes to getting enough chemicals. and fertilizer for the spring planting season.

Transport Topics’ Seth Clevenger and Marissa Gamache walk you through the process of determining North America’s largest 3PLs in Transport Topics’ expanded list of Top 100 Logistics Companies. Log in above or by going to RoadSigns.TTNews.com.

Some customers say the railways have laid off far too many employees due to their continued drive to make operations more efficient and later the COVID-19 pandemic, when thousands of railway jobs were lost.

Ongoing operational issues and how Union Pacific plans to improve overall customer service dominated much of the discussion with company officials, even as the railroad’s finances have improved significantly.

“What’s happening right now is I’m going to blame it on us and shame on us,” Fritz said. “We didn’t have the crew availability for when something went wrong to over-resource for a short time and get it (cargo) off the grid. It’s a difficult situation to be in and we’ve already learned that lesson.

Union Pacific’s operating ratio improved to a first-quarter record of 59.4 from 60.1 in the same period a year ago.

The operating ratio measures a company’s expenses as a percentage of revenue and determines efficiency. The lower the ratio, the more profit the company is able to make.

Earlier this month, Union Pacific sent a letter to customers outlining what the railroad called “numerous service issues” and announced a plan to resolve outstanding issues as soon as possible. The railroad said during the quarter that it had already added 50 new locomotives and planned to bring another 100 into its network, and was actively hiring new employees.

“We are facing a tight labor market. As I have noted before, we are recruiting heavily to alleviate crew shortages in some locations and have changed our recruiting strategies to attract more candidates,” wrote Kenny Rocker, executive vice president of sales and marketing. “We are hiring aggressively and streamlining our onboarding process to get new hires on the job faster. We have 450 employees currently in training to graduate early this summer and more are on the way. Additionally, we have moved approximately 80 crew members to meet crew demand in specific locations in the system. »

The railroad said it plans to hire 100 to 120 new employees a month, or more than 1,400 a year, especially conductors and engineers.

To recruit more employees, Union Pacific changed its hiring process and launched what it calls a “second chance recruiting” program, hiring non-violent felons, who have served their time in the criminal justice system. criminal justice. The company said this effort “shows great promise.”

The program is currently running in Houston, Chicago, Los Angeles and the railroad town of North Platte, Neb.

Industrial chemicals and plastics jumped 20% from $435 million to $520 million.