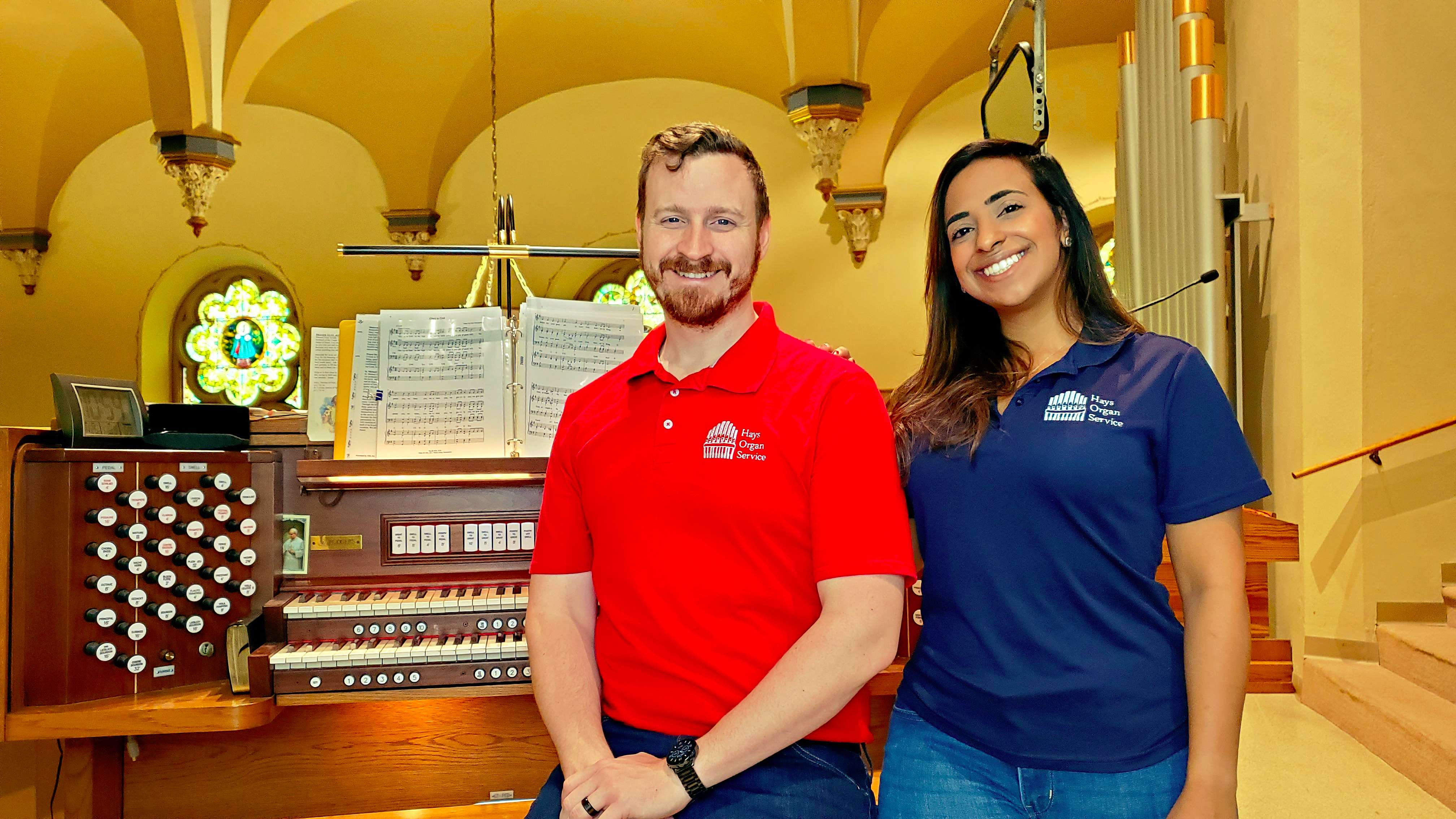 Chris Hund is one of the youngest technicians in his profession.

Earlier this year, he and his wife purchased Hays Organ Service from Steve Demuth, who had owned and operated the business for 48 years.

Demuth said organ technicians are a dying breed. Many are aging, retired or deceased.

As this happened, Hund’s service area expanded significantly. It serves organs across Kansas and much of Nebraska. He and his wife, Laura, recently covered 1,200 miles in just two weeks of work.

When Demuth, 68, started the business, he mainly worked on domestic organs. Most organists had organs at home on which they practiced.

Today, Hund’s work focuses primarily on digital pianos and church organs, both traditional pipe organs and electronic instruments. Some of the pipe organs are up to 100 years old.

Hund said the upkeep of organs is essential to church culture.

Hund has taken an unlikely path in the music world. He has a degree in electrical engineering from Kansas State University and worked for Midwest Energy for a time.

However, he said he was interested in finding another career path that included more flexibility.

Demuth said he wasn’t quite ready to retire, but a bout of COVID resulted in the loss of his treble hearing, which is essential for tuning an organ.

Hund agreed to follow Demuth on a job to see what the business was all about. It turned out in about six months, and on January 1, Hund and his wife officially took over the business. Demuth remained with the company as a consultant.

“In this field, you have to have a background in electronics, be able in mechanics, and you have to have musical skills,” Demuth said. …”And you must like traveling because they don’t bring you the organs.”

Pipe organs can be unique to the church or building in which they are installed, with no manuals or training that can prepare you for that specific instrument.

That’s why Demuth’s continued help has been invaluable, Hund said.

Organ cases control the airflow with a rubber or leather cloth. These can wear out for around 80 years and require the instrument to be rebuilt, Demuth said.

For most churches, any type of organ replacement would be far too cost restrictive. Even tuning an organ takes hours of what Demuth explained as stretching and contorting to reach the tight spaces that hold the pipes.

The setting can greatly affect the sound of the music. Demuth said that masters, such as Bach, composed for organs with a tuning different from that generally used today. Modern organs can be adjusted to accommodate this tuning so that the music matches the composer’s intent.

Mice often mess around in organs, especially those in older rural churches. Demuth was once called to a church to repair an organ in a rural church near Larned. He suspected mice had damaged the organ based on the instrument’s symptoms.

Demuth fixed the organ, but within two weeks church officials called him complaining about problems with the organ.

He returned to find mice, within that short time, had filled one of the organ boxes, which was about a cubic foot, with milo. Curiously, one of the church members told Demuth that the nearest milo field was three-quarters of a mile away.

Not only is there a decreasing number of organ technicians, but there is also a shortage of organists. Demuth said many churches are now sharing organists to meet demand.

Playing the organ is similar, yet different and more complex than playing the piano.

Organs have two manuals plus pedals, while a piano only has sustain pedals. Organs can have much wider ranges than pianos, and the score is different.

“There are some stops on an organ that are strictly an organ stopper,” Demuth said. “They are not borrowed from any other type of instrument. A trumpet set is obviously a trumpet or an oboe or something like that. … “The pipes are tailored to meet that tonal quality.”

Hund said, “I can’t think of any other instrument where you can play so many unique sounds with the press of a key. It really is a unique instrument, and I would hate to see it go.”

As the Hunds move forward with the business, Chris said he hopes to work with churches to perform preventative maintenance to reduce the number of hours and miles the couple travel on the road.

The Hunds work out of a home office. Hays Organ Service can be reached at 785-261-1890 or by email at [email protected] You can also find out more on their website haysorganservice.com or follow them on Facebook @haysorganservice.

Multiple Hours | Robbery of a Shell MGO bunker: a former process technician receives a sentence of 184 months in prison for illicit involvement