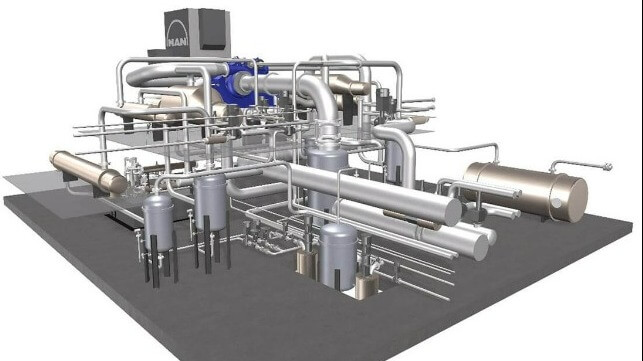 Wayne Jones OBE, Sales Director and Board Member of MAN Energy Solutions, said: “We are delighted with our role in this groundbreaking project. With the current emphasis in the maritime world on reducing methane leaks, our dual fuel ME-GIs will keep carrier emissions to a minimum in this project whose green credentials will be carefully considered. The construction of these vessels enables the revolutionary development of a flexible and efficient European infrastructure for the capture of CO2 from industrial customers. I am convinced that the Northern Lights project has great potential for application across Europe.

The new transporters will be used in the first phase of Northern Lights’ transport and storage infrastructure development and are designed to transport liquid CO2 in specially designed pressurized cargo tanks. The ME-GI dual-fuel engines will run primarily on LNG, while other innovative technologies – such as a wind-assisted propulsion system and air lubrication – will be installed to reduce carbon intensity by around 34 % compared to conventional systems. The vessels are the first of their kind and have the potential to set a new standard for CO2 transport on coastal trade routes.

The Norwegian government’s Longship project aims to demonstrate that carbon capture technology can be applied to larger industrial installations and set a new standard for future industrial projects. The HeidelbergCement Norcem plant near Oslo will be the first to use the Carbon Capture Heat Recovery (CCWHR®) technology developed by MAN and Aker Carbon Capture from the summer of 2024 where it will capture 400,000 tonnes of CO2 per year, corresponding to 50% of its global emissions. The gas will be compressed, liquefied and then transported by Northern Lights using the new carriers to their onshore receiving terminal near Bergen in western Norway, from where a pipeline will lead to an underground storage location in North Sea.

Dr Uwe Lauber, CEO of MAN Energy Solutions, said: “CO2 emissions are currently unavoidable in cement production, with the sector accounting for almost 6-7% of global carbon dioxide emissions. This is why the cement industry is essential on the road. towards a decarbonized future. We are very proud to be able to provide such an energy-efficient solution for HeidelbergCement Norcem, which is the result of our successful pioneering work in CCS with Aker Carbon Capture.”

MAN Energy Solutions’ scope of supply for the cement plant includes a train of electrically powered compressors – type RG 63-7 with integrated CCWHR® technology – which makes it possible to exploit the heat of compression of the recovery compressor. Steam generators cool the CO2 mixture between the compressor stages and generate steam which is in turn used for capture.


The products and services described in this press release are not endorsed by The Maritime Executive.