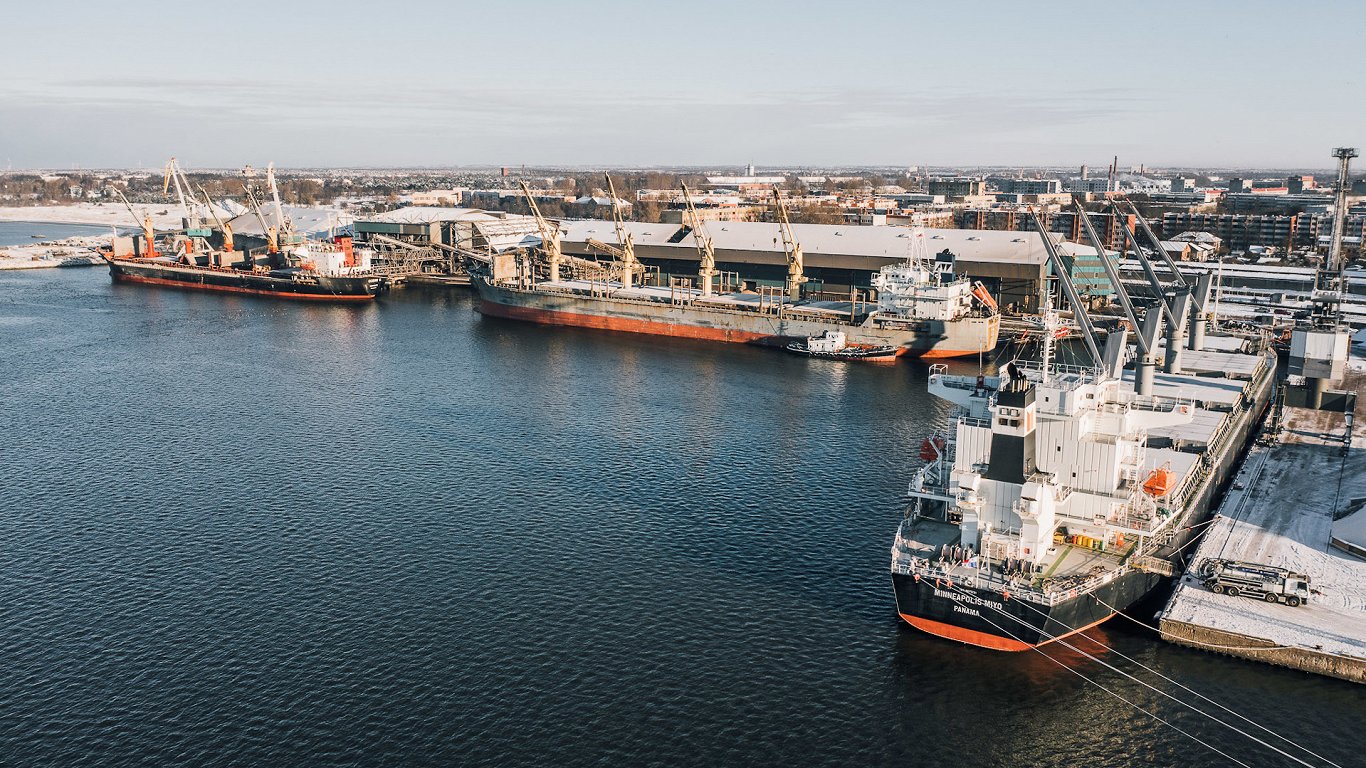 How will the sanctions affect Baltic transport companies? / Article

Russia’s military attack on Ukraine will undoubtedly lead to reduced trade due to sanctions, said Sirle Arro, marketing and communications manager at the Port of Tallinn. In 2021, cargo volume from Russia (mainly liquid bulk and fertilizers) accounted for 30% of total cargo volume transiting Tallinn, while cargo volume from Belarus was 9%. The port estimated that the direct impact of the closure of Russian goods is, according to 2021 data, 6 million euros.

As Russia’s door closes, the port believes another – other trade still passes through Estonia – may open. “Discussions have already started on the construction of LNG terminals. We had projects on the table in the port of Muuga and in Paldiski,” says Arro. Opportunities also arise from changes in supply chains. “We assume that both due to the pandemic and the current crisis, industries are considering getting closer to consumers, which could open up new opportunities for the Port of Tallinn to find customers in industrial parks as well as in short sea shipping (ro-ro and containers)”. In the long term, the port expects Rail Baltica to be completed, which would boost north-south trade.

Among the cargoes whose flow is cut off due to the sanctions and restrictions are Belarusian wooden materials, Russian fertilizers and metal production from Severstal, according to Ansis Zeltiņš, CEO of Riga Freeport. The impact of banning Russian and Belarusian trucks from working in the EU is quite clear. Container deliveries are affected by shipping companies’ decisions not to enter Russian ports, while Western companies are also shutting down their business in Russia. Sales of Russian coal to the EU will end in August. The fact that the terminals have already found niche cargo is however a source of hope. “Our opportunity in the region is Kazakhstan,” which stepped up its activities to find new transit corridors to Europe while depending on Russian Black Sea and Baltic Sea ports before the war, says Zeltiņš . The main possibility is Latvia, although you have to cross Russia before that. Currently, rail traffic is in no way affected. However, if the traffic is completely stopped, the question will arise whether Latvia really needs three major ports.

Regarding the possibility of building an LNG terminal, Zeltiņš acknowledges that it is technically possible to do so in Riga Freeport. Connecting to an upstream pipeline is another matter, and it must be considered that the population is generally not fond of fertilizers, petroleum products or gas in the port.

Riga Freeport continues its work to offer itself as a hub linking China and Europe. However, the trains must also cross Russia in this case. A decision must also be taken at the political level. As in the case of an LNG terminal, it cannot be left entirely to the private sector without the government being involved at all.

“It will take longer to assess the impact of the current sanctions on our operations and performance, but our day-to-day operations are significantly impacted, including due to the significant additional work required to screen partners, clients and customers,” says Agnese Līcīte, Latvian Railways Press Officer.

On the one hand, the volume of the sanctioned freight segments is nil. On the other hand, the trend of increasing freight volumes from Central Asia, especially Kazakhstan, as well as container transit from/to Asia, China and even South Korea continues. Global freight transport is changing. For example, cargo that used to be handled by Black Sea ports and Russian ports in the Gulf of Finland is now being redirected to other transit corridors, including Latvia.

Since non-sanctioned freight groups and stakeholders are not affected, total freight volumes have not changed significantly. In case the decision is taken to close the eastern borders of Latvia, however, the Latvian railway will be strongly affected and the Latvian economy will also be affected.

“In 2021, 63% of the total volume of goods we transported came from Russia and 15% from Belarus. Today, we hardly transport [such] goods. Therefore, it is true to say that the situation is more than serious,” says Raul Toomsalu, CEO of Estonian railway logistics company Operail, explaining the painful outcome of Russian aggression. This is due to EU sanctions against large business owners. The goods themselves, however, are mostly unsanctioned yet.

As information changes every day, there is a lot of confusion in the rail freight industry and plans are not easy to make. In parallel, Operail is working on its other projects. “Our local multimodal freight service is doing very well. We offer door-to-door service for Estonian customers who need solutions where rail transport is preceded or followed by road transport. Operail is also getting closer to launching the Orange Train, a rail corridor between Lithuania and Estonia for transporting goods across the Baltic States. This would help Ukraine find a new export corridor to global markets since Russia blocked Ukrainian ports along the Black Sea and the Sea of ​​Azov.

Lithuanian Railways could lose about half of its freight this year due to sanctions, according to Lithuanian media.

“Russia’s aggression has almost irreversibly altered road freight supply chains,” says Zane Plone, director of public relations at Latvia’s Road Transport Administration. She predicts that due to the existing and possible sanctions against Russia and Belarus, as well as the reaction of both countries, some of the Latvian international road carriers (~20%), which mainly focused on road transport to Russia and Belarus, are likely to be forced to stop their activity or reduce their fleet. Some companies could use the Eastern Corridors to connect to Georgia, Armenia, Azerbaijan, Kazakhstan, Uzbekistan, Tajikistan and Turkmenistan.

According to a survey of road hauliers conducted by the administration, “several companies are trying to reorient themselves towards the Baltic regional market, as the demand for certain categories of goods has increased due to the influx of Ukrainian refugees”. However, the shortage of drivers poses some problems, as some Ukrainian drivers who worked for Latvian companies have left to defend their country, while Russian drivers can no longer receive or extend the documents necessary to work in Latvia.

Redirection is a word that also describes the approach of the Lithuanian company Girteka, which operates the largest fleet of company-owned trucks in Europe. The company plans to continue to focus on business development in Europe and Scandinavia.

When Russia started hostilities, the company suspended its investments in Russia and did not provide services to companies under sanctions. “In addition, part of the East business will be separated from Girteka, while the independent business plans to focus on transporting goods between other Asian countries (China, Kazakhstan, etc.) and Europe” , explains Simonas Bartkus, marketing and communication manager at Girtéka.

Russian aggression in Ukraine has also left its mark on air travel. “During the first week of the war, airBaltic recorded approx. 30% drop in the number of new reservations. The war has certainly affected many passengers in Europe,” says Alise Bethere, SVP Corporate Communications at Air Baltic Corporation. The situation has since changed and a few weeks later there remained a very small impact on the airline’s bookings, as many passengers continued to plan their summer holidays or business trips. She explains that due to current airspace restrictions, airBaltic is currently unable to serve a total of four routes to Ukraine.

Separately, airBaltic announced in March that it was leaving the Russian market, where it served two routes. The airline has had to modify its flight routes in the Middle East, such as to/from Dubai or Tbilisi, although most of the airline’s routes are unaffected.

As for the money: “The revenue share that the company budgeted for the Ukrainian and Russian market is 9% in total. As the war is still ongoing, its full impact is still impossible to assess. AirBaltic has, however, pledged to resume flights to Ukraine as soon as possible.

This article first appeared in Baltic Business Quarterly, published quarterly by the Baltic-German Chamber of Commerce (AHK) and is reproduced with kind permission.

How the Transport Sector is Driving Nigeria’s Economy