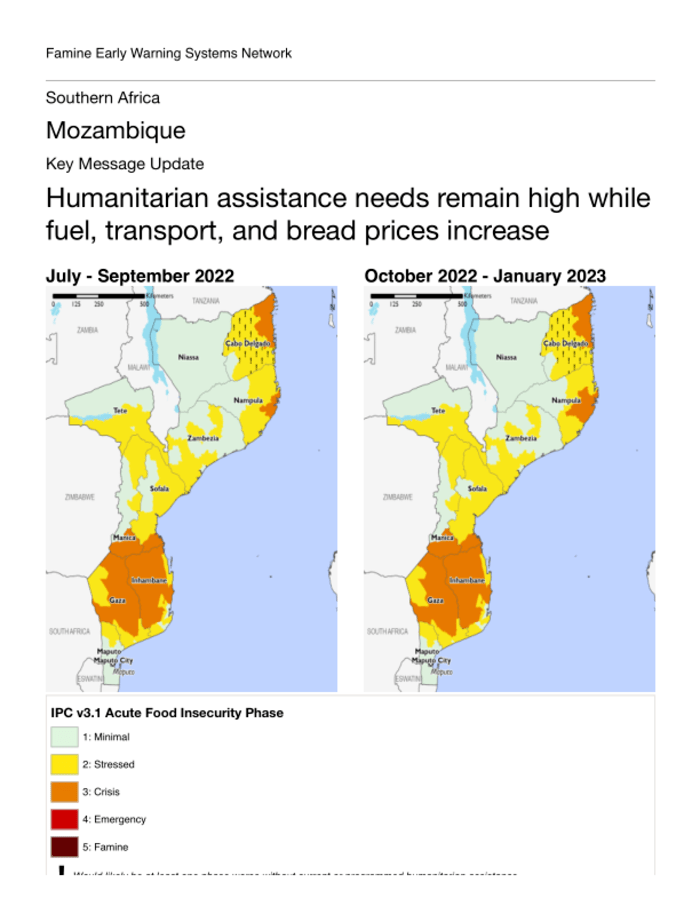 In June, there was a marked increase in the number of attacks by non-state armed groups in Cabo Delgado, mainly in districts where little or no conflict had previously been reported. Although some displaced people have returned home, humanitarian needs remain high. In June 2022, IOM’s DTM estimated that around 946,500 people are likely displaced in Mozambique, an increase of 21% since February 2022. Around 70% of displaced people live with host communities, the rest in displacement sites. It is feared that increased insurgent activity and insecurity will limit humanitarian access and possibly suspend activities in Ancuabe, Macomia, Meluco and Nangade districts. An increase in the number of displaced people will strain the response capacity of the humanitarian community. However, WFP secured funding to avoid a supply disruption from October until January 2023. WFP continues to distribute HFA rations equivalent to 39 percent of daily kilocalories in Cabo Delgado, Nampula and Niassa.

In June, fuel prices rose a further 4-19%, following previous price increases in March and May. In July, diesel is selling at MZN 87.97/litre against MZN 70.97/litre in March in Maputo province. Rising fuel prices translate into higher transport fares and food prices. Due to rising world wheat prices, bread prices in Mozambique are rising; however, bread prices rose at different rates across the country. In Maputo, a bakery contacted by FEWS NET reported that the price of bread in July was 12 MZN/loaf (0.19 USD), compared to 10 MZN/loaf (0.16 USD) in March. Rising bread, fuel and transport prices are likely to start to weigh on the purchasing power of poor households, particularly in urban and peri-urban areas.

Rising global food and non-food costs are driving up the cost of living in Mozambique. In June, the year-on-year inflation rate reached 10.81%, the highest value in more than four years, according to the National Institute of Statistics (INE). Increases in the prices of food/non-alcoholic beverages and transportation contribute the most to the rise in the inflation rate. Since January 2022, cumulative inflation has been 6.44%. Food prices typically decline between May and July, due to increased market supply after the annual harvest, but high transport costs and increased demand for products other than wheat ( maize, cassava, sweet potato) keep food prices high. Overall, the general increase in the prices of basic products and services reduces the purchasing power of most poor households, particularly in peri-urban areas. Currently, households are adjusting their spending, buying less food or non-food items, buying sweet potatoes or cassava instead of bread and reducing their consumption of fried foods.