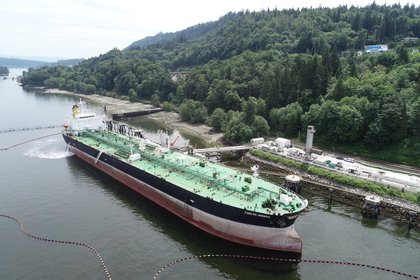 A major Japanese shipbuilder is gearing up for a new type of sea freight: trapped CO₂.

Carbon dioxide capture and storage has an important role to play in achieving net zero goals. But this can be difficult if the source of greenhouse gases, such as a power plant, is not near a CO₂ storage facility. This is where ships come in.

Japanese company Mitsubishi Shipbuilding Co., part of the MHI Group, is working on a prototype designed to transport large amounts of CO₂ over long distances. The company expects such vessels to be needed and used on a large scale in the coming years as the market for carbon capture, storage and utilization grows. While liquid CO₂ transport vessels have already been used by the food industry, the company expects its vessel to be the first to specifically serve the burgeoning CO₂ capture, utilization and storage sector. carbon (CCUS).

The idea is to capture the CO2, liquefy it and then transport it to storage units on board ships.

Carriers will become increasingly necessary as it will be impossible to completely eliminate carbon dioxide emissions, according to Takeshi Maetoko, senior deputy director, planning and administration department, Mitsubishi Shipbuilding. “Even if renewable energy and hydrogen and ammonia, which do not emit CO₂, become widespread in the future, fossil fuel and CO₂ emissions cannot be reduced to zero, and we believe that ‘a CCUS value chain will also exist,’ he said in a statement. statement sent by email.

Due for delivery by the end of March next year, the demonstration vessel will be 72 meters (236 feet) long with a tank capacity of 1,450 cubic meters.

The shipbuilder is not the only one with plans to tap into the CCUS market, and the idea is attracting growing interest from greenhouse gas polluters on land and at sea. Northern Lights JV DA, a partnership held by Shell plc, TotalEnergies SE and Equinor ASA to transport and permanently store CO₂ under the North Sea, has ordered two carriers to transport liquefied carbon dioxide. The ships will be built by Dalian Shipbuilding Industry Co. and will be ready for delivery by mid-2024. Elsewhere, industrial gas supplier Air Liquide SA and shipping company Sogestran SA, both based in France, are teaming up to transport liquid CO₂ using ships and barges.

The International Energy Agency’s net-zero emissions roadmap by mid-century projects that 1.6 gigatonnes of CO₂ will be captured each year by 2030. This will increase to 7.6 gigatonnes in 2050. , of which approximately 95% must be kept in permanent geological storage.

Pipelines can also be used to transfer CO₂ from emitters to storage facilities. Still, it will be cheaper to transport greenhouse gases by ship than by pipeline when distances exceed 300 kilometres, according to Mitsubishi Shipbuilding, which referred to a presentation by the Innovative Technology Research Institute for Earth.

In addition to transporting liquid CO₂ from land-based polluters, Mitsubishi Shipbuilding is also involved in developing a system to remove carbon dioxide from ship exhaust, which is then liquefied and stored on board.

The shipping industry is a major producer of CO₂, releasing more into the atmosphere than Germany and the Netherlands combined.