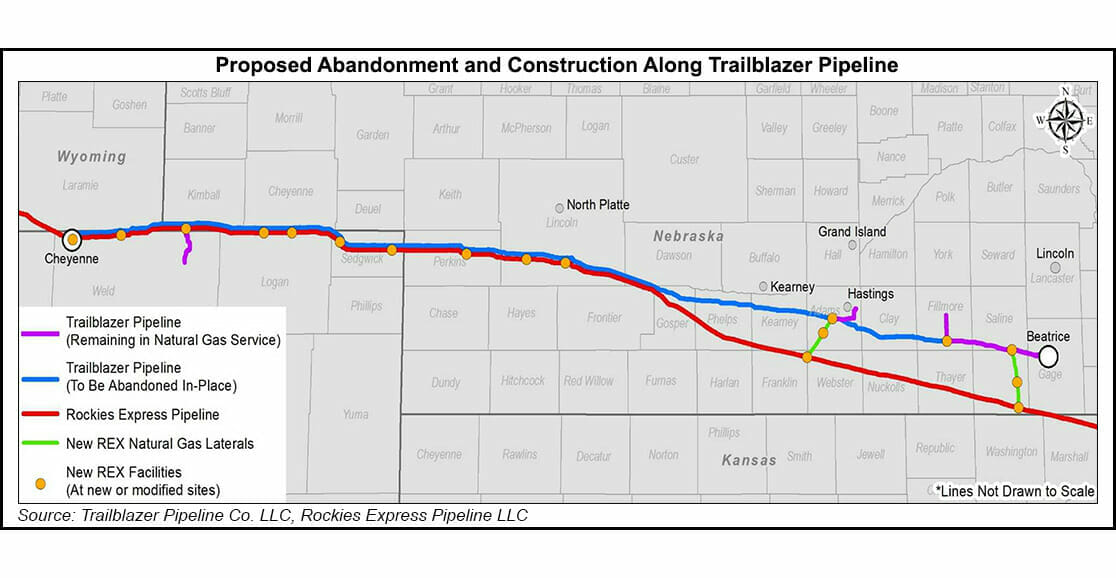 Trailblazer Pipeline Co. LLC (TPC) and Rockies Express Pipeline LLC (REX) are moving through the regulatory process with plans to discontinue the Trailblazer system and reallocate the infrastructure to transport carbon dioxide (CO2).

In late May, the two intermediaries owned by Tallgrass Energy Partners filed plans for the abandonment project with FERC.

The plan involves abandoning 392 miles of the Trailblazer pipeline as well as three TPC compressor stations, including a natural gas compressor. The pipeline would be reconfigured to transport CO2, which would ultimately be sequestered at a proposed sequestration center in the Denver-Julesburg Basin.

REX and TPC are also seeking approval from the Federal Energy Regulatory Commission for REX to construct various pipeline facilities and booster stations to absorb the flow of natural gas from the Trailblazer pipeline.

New REX facilities would be built along the pipeline in Weld, Logan, and Sedgwick counties in Colorado, as well as Kimball, Franklin, Webster, Jefferson, Perkins, Lincoln, Kearney, Fillmore, Adams, and Saline counties in Nebraska.

REX is also seeking approval to lease capacity from TPC, which would allow TPC to continue the services it provides on abandoned facilities while allowing a seamless transition for existing TPC shippers, according to filings by the company. FERC.

“Based on current utilization and available contracted capacity, there is more than enough space on REX to accommodate all of the current capacity and commitments on the Trailblazer pipeline,” the carrier said. word.

The commissioners are preparing an environmental review of the project and accepting public comments until August 10. If approved, PTC and REX believe the conversion project could also be completed in early 2024, the spokesperson said.

Documents filed by FERC show an estimated project cost for TPC and REX exceeding $237 million. However, the figure “is associated with new natural gas-related infrastructure to provide continued service to Trailblazer customers and markets, and does not include capital associated with laterals, transportation and CO2 sequestration,” said the spokesperson.

The 450-mile TPC system, built 40 years ago, connects Cheyenne, WY, to Beatrice, NE, where it interconnects with larger interstate pipelines that transport natural gas to major consumer markets in the Midwest and the Northeast.

The REX system was completed in 2009 and stretches 1,700 miles through Wyoming and Colorado to eastern Ohio.

In September, REX, which transports 4.4 billion cubic feet per day to Midwestern markets from major production basins in the Rockies and Appalachia, became the first interstate natural gas transmission system to be certified by Project Canary.