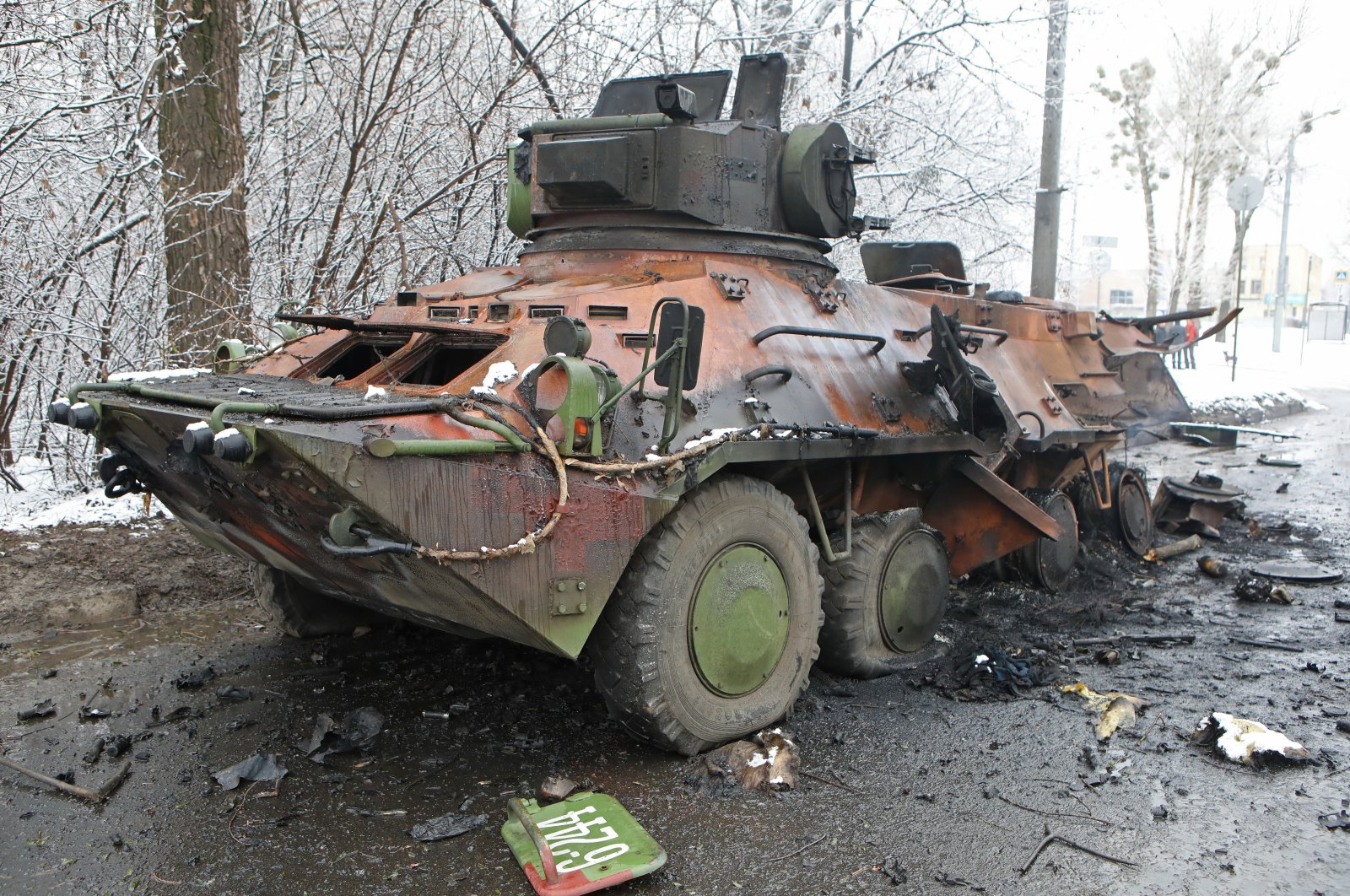 He also added that on the western outskirts of Kiev there was an “attempt to advance in the direction of Bucha, Gostomel and Irpin, but came under a powerful missile and artillery attack from the armed forces”.

Arestovich assured that the Ukrainian army controlled the situation and destroyed the enemy. According to the official, residents had also joined the fight. A number of Russian BMP combat vehicles were set on fire using Molotov cocktails in Bucha.

Street fighting erupted in Kharkiv on Sunday and Russian troops put increasing pressure on strategic ports in the south of the country following a wave of attacks on airfields and fuel facilities elsewhere that appeared to mark a new phase of the Russian invasion.

Russia has sent a delegation to Belarus for peace talks with Ukraine, according to the Kremlin. Ukrainian President Volodymyr Zelenskyy suggested other locations, saying his country was unwilling to meet in Belarus because it served as an invasion base.

Until Sunday, Russian troops had remained on the outskirts of Kharkiv, a city of 1.4 million people about 20 kilometers (12.4 miles) south of the border with Russia, while other forces were passing to drive the offensive deeper into Ukraine.

“We are fighting, fighting for our country, fighting for our freedom because we have the right to do so,” Zelenskyy said. “Last night was difficult – more shelling, more shelling of residential areas and civilian infrastructure. There is not a single installation in the country that the occupiers would not consider eligible targets.”

Huge explosions lit up the sky early Sunday near the capital, Kyiv, where terrified residents holed up in homes, underground garages and metro stations in anticipation of a full-scale Russian assault.

Zelenskyy called the Russian offensive “state terrorism”. He said attacks on Ukrainian cities should be investigated by an international war crimes tribunal and cost Russia its place as one of the five permanent members of the United Nations Security Council united.

“Russia has taken the path of evil, and the world should come to strip it of its seat on the UN Security Council,” he said.

Authorities maintained a 39-hour curfew to keep people off the streets of the capital until Monday morning, making it difficult to gauge the intensity of the fighting. Zelenskyy’s office said explosions were reported at Kyiv International Airport.

Flames rose from an oil depot near an air base in Vasylkiv, a town 37 kilometers (23 miles) south of Kiev where there was heavy fighting, according to the mayor. Russian forces blew up a gas pipeline east of Kharkiv, prompting the government to warn people to cover their windows with a damp cloth or gauze to protect against smoke, the president’s office said.

Russian President Vladimir Putin has not disclosed his ultimate plans, but Western officials believe he is determined to overthrow the Ukrainian government and replace it with his own regime, redraw the map of Europe and revive the influence of Moscow during the Cold War era.

The pressure on strategic ports in southern Ukraine appeared to be aimed at taking control of Ukraine’s coastline stretching from the border with Romania in the west to the border with Russia in the east. A Russian Defense Ministry spokesman, Maj. Gen. Igor Konashenkov, said Russian forces blocked the Black Sea towns of Kherson and the Sea of ​​Azov port of Berdyansk,

Cut off Ukraine’s access to its seaports, which would be a severe blow to the country’s economy. It could also allow Moscow to build a land corridor to Crimea, which Moscow annexed in 2014 and which has until now been connected to Russia by a 19-kilometre (12-mile) bridge, the longest bridge in Europe. opened in 2018.

The Russian military also exerted increasing pressure on strategic ports in southern Ukraine, blockading the cities of Kherson on the Black Sea and the port of Berdyansk on the Sea of ​​Azov.

He said Russian forces had also taken control of an airbase near Kherson and the town of Henichesk in the Sea of ​​Azov. Ukrainian authorities also reported fighting near Odessa, Mykolaiv and other areas.

Ukraine’s health minister announced on Saturday that 198 people, including three children, had been killed and more than 1,000 injured in Europe’s biggest ground conflict since World War II. It was unclear whether these figures included both military and civilian casualties.

The UN refugee agency said on Saturday evening that more than 200,000 Ukrainians had arrived in neighboring countries since the invasion began on Thursday. The UN has estimated that the conflict could produce up to 4 million refugees, depending on its duration.

Kremlin spokesman Dmitry Peskov said a Russian delegation of military officials and diplomats arrived in the Belarusian city of Gomel on Sunday for talks with Ukraine. Zelenskyy on Friday offered to negotiate a key Russian demand: the abandonment of NATO membership ambitions.

“The Russian delegation is ready for the talks, and now we are waiting for the Ukrainians,” Peskov said.

Ukraine’s president has said his country is ready for peace talks, but not in Belarus given ally Russia’s role in the invasion.

“Warsaw, Bratislava, Budapest, Istanbul, Baku, we have offered them all to the Russian side and we will accept any other city in a country that has not been used to launch missiles,” Zelenskyy said. “Only then could the talks be honest and end the war.”

Peskov claimed that Ukraine had offered to hold talks in Gomel. He added that Russian military action was continuing pending the start of talks.

Zelenskyy’s adviser Mykhailo Podolyak called Moscow’s offer “manipulative”, adding that “Russia continues to lie” and stressing that Ukraine had not agreed to talks in the Belarusian city.

As Russia continues its offensive, the West is scrambling to equip outnumbered Ukrainian forces with weapons and ammunition while punishing Russia with far-reaching sanctions designed to further isolate Moscow.

The United States pledged an additional $350 million in military aid to Ukraine, including anti-tank weapons, body armor and small arms. Germany said it would send anti-tank missiles and weapons to the beleaguered country and close its airspace to Russian planes.

The United States, the European Union and the United Kingdom have agreed to block “selected” Russian banks from the global financial messaging system SWIFT, which transfers money to more than 11,000 banks and other financial institutions around the world. world, as part of a new round of sanctions aimed at imposing a severe cost on Moscow for the invasion. They also agreed to impose “restrictive measures” on Russia’s central bank.

Responding to a request from Ukraine’s digital transformation minister, tech billionaire Elon Musk said on Twitter that his Starlink satellite internet system was now active in Ukraine and there were “more terminals on the way”.

Putin sent troops to Ukraine after denying for weeks that he intended to do so, while building up a force of nearly 200,000 troops along the countries’ borders. He claims the West has not taken Russia’s security concerns about NATO, the Western military alliance that Ukraine aspires to join, seriously. But he also expressed his contempt for Ukraine’s right to exist as an independent state.

A senior US defense official said on Saturday that more than half of Russia’s combat power amassed along Ukraine’s borders had entered the country and Moscow had had to commit more fuel supplies and other support units inside Ukraine than originally planned. The official spoke on condition of anonymity to discuss the US internal assessments.

Russia says its assault on Ukraine only targets military targets, but bridges, schools and residential neighborhoods have been hit.

Ukrainian Ambassador to the United States Oksana Markarova said troops in Kiev were fighting Russian “sabotage groups”. According to Ukraine, some 200 Russian soldiers were captured and thousands killed. Moscow did not provide casualty figures.

Markarova said Ukraine was gathering evidence of bombings of residential areas, kindergartens and hospitals to submit to an international war crimes tribunal in The Hague as possible crimes against humanity. The prosecutor of the International Criminal Court (ICC) said he was following the conflict closely.